Jana is a postdoctoral researcher in Archaeology, currently at the Freie Universität Berlin.

Jana specialises in researching architecture and the social organisation of the Late Neolithic period (the first farming communities) in the Eastern Mediterranean. After studying Near Eastern Archaeology at the Freie Universität Berlin, she received a PhD in Archaeology from the Flinders University in Adelaide.

Jana's current postdoctoral project, entitled The Neolithic revolution as negative heritage, investigates a trend in popular science writing whereby the transition to farming during European/Near Eastern prehistory is seen as a negative step in the development of humankind – a sort of ‘original sin’ which set in motion a host of negative developments regarding social structures, human health and the environment that in the present threaten the very life basis of the human species. Her interest in this matter arises from the fact that prehistory is rarely debated in the public sphere, and that this particular debate touches on issues she and many of her colleagues also discuss in academic research of the Neolithic period. 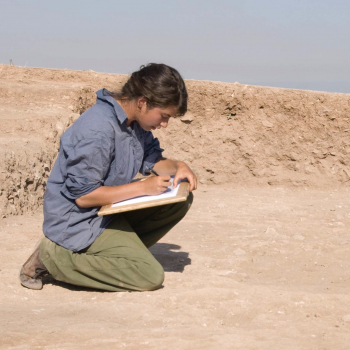