Siddharth Pandey is a Research Fellow in Global History at the Ludwig Maximilian University, Munich, Germany, where the Centre for Global History was inaugurated in 2019. Later this year, he will be a Visiting Scholar at Yale University’s Centre for British Art.

Pandey's research straddles English literature, cultural studies, global history, heritage conservation, visual arts, materiality studies and geohumanities. Hailing from the Himalayas of Shimla in North India, he completed his Bachelors (H), Masters (MA) and MPhil in English Literature from the University of Delhi (India), after which he joined the University of Cambridge for a second MPhil in Children’s Literature from 2012-13. He recently completed his PhD (2019) at Cambridge, that studied the ways in which ‘making’ in its myriad forms (like human craftsmanship and non-human growth) impacts the genesis of ‘wonder’ in secondary worlds of fantasy literature. Drawing insights from the sociological, anthropological and philosophical works of thinkers such as Richard Sennett, Tim Ingold and New Materialists, the thesis argued that literary fantasies often make an issue of ‘making’ in a self-reflexive manner, that contributes both to the feeling and politics of magical realms. While fantasy as a field of study overtly lends itself to issues of wonder, imagination and making, the same concepts however have also been explored in Pandey’s other work dealing with colonial literature, arts and cities in the South Asian context. As a historian of the Indian Himalayas and particularly the erstwhile summer capital of British India, Shimla, Pandey has presented, published and curated extensively on the cultural evolution of the town, from the colonial to the postcolonial times. Along with academic presentations, his work as a documenter of hill-station-cultures has also found expression in photography, which has been curated in solo exhibitions in both India and the UK. In 2016, he was invited by the Oriental Museum, Durham, to curate a six-months long exhibition on Shimla, which included his photographs as well as colonial era material culture. In the same year, he was also commissioned by the Victoria and Albert Museum, London, to document colonial sculpture and architecture in Mumbai for a major exhibition on the 19th century craftsman-thinker John Lockwood Kipling in London and New York.

Pandey’s other research interests include nature writing, cinema studies, education (with special interest in the humanities), non-fiction writing and travel literature. As a self-taught pianist, he loves to compose tunes at the interface of Himalayan folk music and Celtic sounds. His publications include book chapters, photographic entries and reviews in the following anthologies and journals: Consuming Architecture: On the Occupation, Appropriation and Interpretation of Buildings (Routledge, 2014); Ravenclaw Reader: Seeking the Artistry and Meaning of JK Rowling’s Hogwarts Saga (Unlocking Press, 2015); Critical Quarterly (2016); Gramarye Journal (2016); John Lockwood Kipling: The Arts and Crafts in Punjab and London (Yale, 2017); Visual Histories of South Asia (Primus, 2018). Other publications include regular feature stories for Indian national dailies focusing on a variety of topics, from education to aesthetics and travel to politics of architecture. In 2016 and 2017, Pandey served on the Final Panel Jury of the Queen’s Commonwealth Essay Writing Competition, the world’s largest and oldest writing contest for school children. Apart from his recent fellowships, he is the recipient of the Cambridge International Scholarship, the Cambridge Shared Commonwealth Scholarship, and the Charles Wallace India Trust Award, among other recognitions. 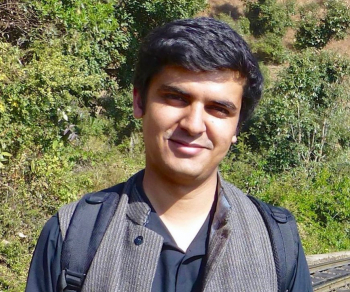