Surabhi Ranganathan is Senior Lecturer and Deputy Director of the Lauterpacht Centre for International Law at the University of Cambridge.

Her current work traces the co-constitution of international law and the ocean from 1945 to now, unsettling what we take as the givens in relation to the spatial zones, resource allocations and functional jurisdictions effected by the law of the sea. It extends the history and critique of international law into new areas, such as ocean depths and bottoms, global commons, marine infrastructures, and techno-utopian imaginaries, and, from the underexplored vantage point of oceanic law-making, throws new light on current preoccupations of international legal histories: statehood and territory, decolonization and the new international economic order, the Cold War, race and empire, and the emergence of new legal forms and institutions.

To know more about her research, you might read the interview, Garret Hardin, Arvid Pardo and the Fascinations of Interdisciplinarity (pp. 28-33); listen to Big Blue Juridical Planet on Fool's Utopia; hear the talk Unmaking the Ocean delivered at Oxford, or watch her Snyder Lecture: The Legal Construction of the Ocean at the University of Indiana. Short pieces include Techno-Utopia of the Deep on CUP's fifteeneightyfour blog; a sequence of short essays Interfaces of Land and Sea for Visualizing Climate and History; and Seasteads, Land-grabs and International Law. You might also enjoy this conversation on different approaches to international law between Professor Andrea Bianchi and her, hosted by the Max Planck Institute Luxembourg. To find out more about her monograph, please look up the roundtable on the book hosted by Volkerrechtsblog, or hear this recording.

She was a Visiting Professor at the Graduate Institute, Geneva for spring 2020, and has been invited as a Global Professor at NYU School of Law. She will be a Visiting Fellow at the Center for History and Economics, Harvard in spring 2021.

Educated at NLSIU Bangalore, NYU (as a Vanderbilt Scholar), and Cambridge (as a Gates Scholar, and JC Hall Scholar at St. John's College), Ranganathan has clerked for the Supreme Court of India, and interned with UNHCR, UNICEF, the Telecom Regulatory Authority of India, and the Central Empowered Committee for the Environment established by the Supreme Court of India. Her editorial roles include the Leiden Journal of International Law, the Cambridge Law Journal, and the Scientific Advisory Board of the European Journal of International Law. 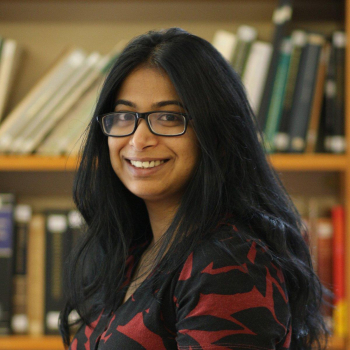