The Right to Science: Then and Now | Helle Porsdam & Sebastian Porsdam Mann

gloknos is thrilled to announce the launch of The Right to Science: Then and Now, edited by our long-time collaborators Helle Porsdam and Sebastian Porsdam Mann.

For more information about this event, including how to register for Zoom details, please email Samantha Peel.

That everyone has a human right to enjoy the benefits of the progress of science and its applications comes as a surprise to many. Nevertheless, this right is pertinent to numerous issues at the intersection of science and society: open access; 'dual use' science; access to ownership and dissemination of data, knowledge, methods and the affordances and applications thereof; as well as the role of international co-operation, human dignity and other human rights in relation to science and its products. As we advance towards superintelligence, quantum computing, drone swarms, and life-extension technology, serious policy decisions will be made at the national and international levels. The human right to science provides an ideal tool to do so, backed up as it is by international law, political heft, and normative weight. This book is the first sustained attempt at turning this wonder of foresight into an actionable and justiciable right.

This title is also available as Open Access on Cambridge Core.

Helle Porsdam, University of Copenhagen
Helle Porsdam is Professor of Law and Humanities and UNESCO Chair in Cultural Rights at the University of Copenhagen, Denmark. She holds a PhD from Yale University in American Studies, has held fellowships at Harvard Law School; Wolfson College Cambridge; and was a Global Ethics Fellow with the Carnegie Council for Ethics in International Affairs. Her publications include Legally Speaking: Contemporary American Culture and the Law (1999), From Civil to Human Rights: Dialogues in Law and Humanities in the United States and Europe (2009), and The Transforming Power of Cultural Rights: A Promising Law and Humanities Approach (2019).

Sebastian Porsdam Mann, University of Oxford
Sebastian Porsdam Mann is a DPhil researcher at the Faculty of Law at Oxford. He has previously held a postdoc in bioethics at Harvard Medical School and a Carlsberg Foundation Postdoctoral Fellow at the Division of Philosophy at the University of Copenhagen, and was a hosted researcher at the University of Oxford Uehiro Center for Practical Ethics. He was educated in philosophy, psychology, neuroscience, and applied bioethics at Cambridge. Before this, he served in the security division of the Germany Military Police. He is currently finishing a popular science book on the science and ethics of enhancing cognitive functions. 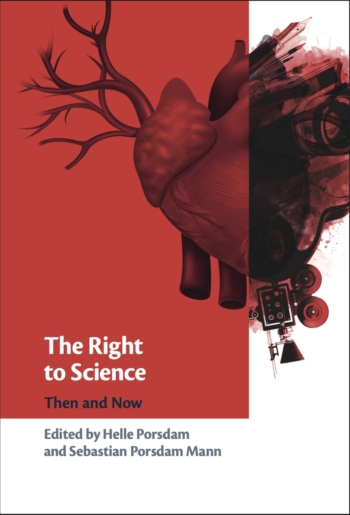 Image: Josu Guevara, 'ArteRia'. With thanks to Cambridge University Press.