This online exhibition presents historical illustrations of the Arctic excerpted from print artefacts (periodicals, books and postcards), highlighting the cultural and technological constructedness of the far North during the long nineteenth century (1789-1914). In other words, the exhibition focuses on Arctic images as representations of matter and as matter in itself. With this dual focus, the overall goal of the exhibition is to invite reflections on how today’s cultural as well as technological socialisation influences our mental images and understandings of the Arctic regions.

As a geographical entity, the Arctic today has precise coordinates: north of 66°33ʹ48.5ʺ. Most of us have never experienced these geographical regions. For us, the Arctic is a mediated experience: it finds its way into our books, TVs, cinemas, media, museums and, ultimately, our minds. In short, the Arctic travels. These travels are wholly shaped by human agency. More concretely, the mediated experiences of the far North are crucially influenced by technological and cultural infrastructures. This exhibition relies on historical print artefacts to raise awareness of these infrastructures. It includes excerpts from newspapers, magazines, books and postcards, mainly from the nineteenth and early twentieth centuries.

The choice of print artefacts as the resource for this online exhibition is based on the crucial role which they played during the long nineteenth century: as products of print technology, a central Western technology of modern history, these items disseminated formulaic representations of the Arctic, enabling the mythmaking of heroic northern explorers and nationalising exploration narratives. The resulting ubiquity of the Arctic in everyday life shaped individuals’ perceptions and understandings of the North — just like today’s technologies and ubiquity of the Arctic shape our visual and epistemic perceptions regarding this polar region.

The exhibition seeks to offer the viewer a number of ways of uncovering the cultural and technological socialisation underlying their own perception of the far North, thereby inviting their awareness of and reflection on its constructedness. In so doing, the exhibition helps to question present and past susceptibilities to images and imaginations of the Arctic regions, thereby also engaging with troublesome colonial pasts. In the best-case scenario, this reflection and awareness will not vanish once the viewer has left the online exhibition but will foster a form of ‘Arctic literacy’, including an understanding of the limitedness, gaps and distortion of our perceptions and a new considerate engagement with the Arctic regions. Put differently, the exhibition aims to facilitate an un/learning of (visually) encountering the Arctic.

To this end, the exhibition uses a number of strategies, all of which are meant to create obstacles and challenges to our culturally and technologically socialised visual intuition of the Arctic. The aesthetic strategies applied here have many roots, and are conceptually related to, for example, the Brechtian estrangement, which aimed at hindering audiences from identifying themselves with the theatrical performance and through this experience compelling them to engage cognitively with what they saw on stage. In short, the strategies employed here aim to prevent the viewer’s uncritical emotional involvement and invite critical reflection instead.

The use of digital technology to present historical print artefacts—while counterintuitive to some degree—in fact contributes to this critical approach. For example, the exhibition zooms in on specific details, thereby interrupting a mere aesthetic experience. One image zooms in wrinkled paper and traces of print production, which aims to help the viewer to experience the literal constructedness of the respective artefact and allows them to fathom the cultural constructedness more easily.

The selective reliance on black and white vs. colour images is another way of preventing a quick emotional response to the visual stimuli and soliciting cognitive engagement. A further strategic means of enabling such a reflective interaction is the use of satirical images. Such historical self-humour is employed to interrogate what scholars have dubbed ‘optical imperialism’ — heroic exaggerations surrounding the Arctic and its colonial visualisations.

Also, the repeated use of the same postcard image (see figures 8a and 9b in exhibition) serves as an element of alienation, as does the sequence of images: its role is to prevent the viewer from experiencing a smooth flow of aesthetic events and create slight fragmentation, thereby appealing less to the spectator’s feelings than to their alertness and curiosity.

Additionally, the exhibition relies on the inclusion of print artefacts from non-European/non-Western countries. Through this glimpse away from our own culturally and technologically constructed Arctic towards another, viewers briefly feature as outsiders to other collective constructs of the far North. This experience is repeated several times throughout the exhibition so that the Arctic is no longer a single national or cultural image but rather a variety of discourses in different places and at different times. This helps the spectator to access their own construct of the Arctic and hopefully develop a productive approach to their own ‘Arctic gaze’.

Thus, this Arctic exhibition is not so much about the Arctic. It is about using historical museum, library and archive artefacts as catalysts to question past and present geographical conceptualisations. It is about illustrating the cultural and technological infrastructures in which northern regions were subsumed in the past and continue to be in the present. It is about the way in which a geographical entity has travelled through the human hand, and it invites viewers to engage with their own constructs of it. 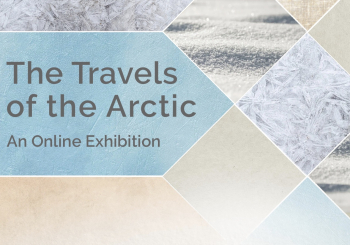