This research group will work towards:

Activities planned at this early stage include monthly zoom meetings and book launches for our Cambridge University edited volume, The Right to Science: Then and Now which will be published in late November or early December.

Sebastian Porsdam Mann is a researcher and DPhil student at the Faculty of Law at Oxford. Following undergraduate (philosophy, psychology, and neuroscience) and graduate (PhD, neuroethics) studies at Cambridge, he held postdoctoral fellowships at Harvard Medical School's Center for Bioethics and, supported by a Carlsberg Foundation grant, the Uehiro Center for Ethics at Oxford as well as Copenhagen University. In addition to the human right to science, Sebastian's research interest span across blockchain and data ethics, cognitive enhancement, the ethics of modifying lifeforms, and ethical aspects of clinical proteomics.

Christine Mitchell founded the clinical ethics program at Boston Children’s Hospital, directing the ethics consultation service and leading the Ethics Advisory Committee for over 30 years. At Harvard Medical School, where she is Executive Director of the Centre for Bioethics, which she helped to launch in 2014, Mitchell developed the Capstone program for Master of Bioethics students, Consortia on Clinical Ethics and Research Ethics, and the Leadership Group of ethics committees at 16 Harvard-affiliated teaching hospitals. She worked with Sebastian Porsdam Mann (the first Post Doc at the new Centre for Bioethics) to develop a Right to Science Study Group at HMS with international colleagues. Her research focuses on ethics consultation, and public engagement in ethical aspects of institutional policies. She has lectured on topics in clinical ethics all over the United States, Denmark, Finland, Germany, Indonesia, Norway, Sweden, Switzerland, and the UK. 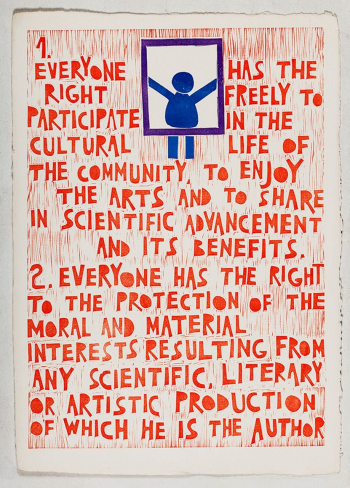 Image: The United Nations' Right to Science, by Otávio Roth.