Join us at the Lauterpacht Centre for International Law, Finley Library, on Tuesday 27 November at 5PM for the launch of Prof. Antje Wiener's book Contestation and Constitution of Norms in Global International Relations, just published with Cambridge University Press. The event is co-sponsored by Hughes Hall and gloknos.

In Contestation and Constitution of Norms in Global International Relations, Antje Wiener examines the involvement of local actors in conflicts over global norms such as fundamental rights and the prohibition of torture and sexual violence. Providing accounts of local interventions made on behalf of those affected by breaches of norms, she identifies the constraints and opportunities for stakeholder participation in a fragmented global society. The book also considers cultural and institutional diversity with regard to the co-constitution of norm change. Proposing a clear framework to operationalize research on contested norms, and illustrating it through three recent cases, this book contributes to the project of global international relations by offering an agency-centred approach. It will interest scholars and advanced students of international relations, international political theory, and international law seeking a principled approach to practice that overcomes the practice-norm gap.

Professor Antje Wiener holds the Chair of Political Science and Global Governance at the University of Hamburg since 2009. Her other publications include ‘European’ Citizenship Practice: Building Institutions of a Non-State (Westview 1998), The Invisible Constitution of Politics: Contested Norms and International Encounters (CUP 2008) and A Theory of Contestation (Springer 2014), various edited volumes as well as numerous publications in peer-reviewed journals. 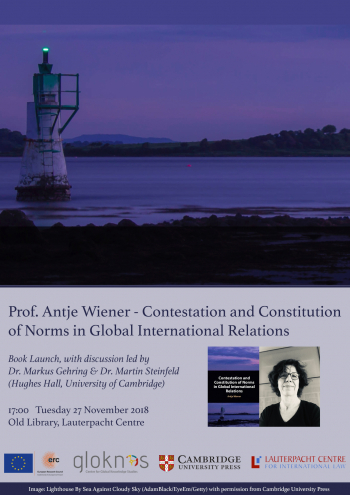