gloknos team member Felix Anderl just published a blogpost (in German) on Solidarity Across Borders at Theorieblog.de, as part of his ARTEFACT-Solidarity project.

In Critical Theory, progress is often defined as the expansion of solidarity among friends towards solidarity with strangers. Due to the postcolonial critique of cosmopolitan reason and its hidden Eurocentrism, such solidarity projects have recently been delegitimised for their expansionist and prescriptive agenda. Through their "globalism" it is argued, they reporoduce the hierarchies they were meant to overcome. In this article, Felix Anderl argues that in practice, this dualism between "global" and "local" falls apart. Progressive transnational movements like La Via Campesina mobilize for "global struggle", but this struggle is grounded in particularities and difference. Solidarity is visible in the processes through which these particularities become sovereign by reflexively constituting the 'global struggle'. 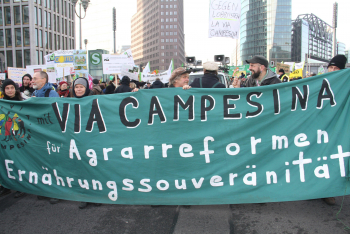