Could you tell us a little about the book and how you came to develop it?

For thirty years, the Department of History and Philosophy of Science at Cambridge has been home to the Cabinet of Natural History. When students and staff founded this weekly lunchtime seminar, they helped foster what was then a pretty novel area of research in the history of science: the history of natural history. The collection Cultures of Natural History (1996) emerged from conversations and ideas encouraged by the Cabinet and showcased some of the most exciting scholarship on the cultural history of natural history. It became a standard reference, and a point of entry for many students looking to explore everything from Renaissance cabinets of curiosity to eighteenth-century voyages of exploration to amateur naturalists of the later 1800s. Some twenty years later, with many more historians working in the area and scholarship extending in many new directions, it seemed high time to curate a follow-on collection that captured some of these exciting trends. This was the origin of Worlds of Natural History.

What do you think has changed most about history of natural history scholarship since the publication of this volume's predecessor, Cultures of Natural History?

In the early 1990s, when Cultures of Natural History was conceived, the history of natural history had only recently come to be seen as a worthy addition to other more established areas of the history of science. Today, it is among subjects at the forefront of the field, especially in forging new understandings of colonial and postcolonial science, the global circulation of knowledge, and public cultures of science.

One of the most obvious areas in which Worlds of Natural History differs from its predecessors is in charting the history of natural history after 1900, a period left out of Cultures back in 1996. Instead of concluding with the marginalization of natural history within European scientific institutions at the end of the nineteenth century, in favour of laboratory-based biological research, Worlds follows the lead of historians in seeing a diversification of natural history after this juncture rather than its end. Natural historical practices persisted within and beside the new biology, whether in tracking wildlife with radio signals, reimagining botanical gardens as centres of conservation sciences, or aligning molecular genetics to existing ideas about human and other biological diversity.

This is only the most obvious of the historiographical developments visible in Worlds. The study of material cultures of collecting and exchange were in their infancy in 1996 but are today the subject of extensive and still exciting research. We were lucky to have trailblazers like Anne Secord and Paula Findlen, both of whom contributed to Cultures of Natural History, develop new chapters for Worlds. These reflect the latest developments in their research, and in the study of material worlds of naturalists more generally. A similar trajectory can be traced for the use of network models to understand natural historical practices, which has not only grown from the glimmer it was two decades ago but also influenced broader understandings of how knowledge travelled among natural philosophers and scientists from different institutions, countries, disciplines, social classes, and more.

Why is it so important to take a global perspective on natural history?

The circulation of specimens, observations and even observers has been central to natural history, past and present. It doesn't exaggerate much to say that it would be impossible to understand its history without thinking globally. The systemization of knowledge about the natural world depended on detailed accounts of travellers and the expertise of locals, and on cross-continent trade in skins, shells, seeds, and books. The European tradition of natural history drew on the distinct knowledge traditions of peoples around the world (a case made persuasively in Worlds by Iris Montero with respect to the hummingbird in colonial era Mexico), and was transformed as it was taken up in new cultural contexts (here the contribution of Jung Lee on botany in twentieth-century Japan is particularly instructive). Several essays, including Sadiah Qureshi on human exhibitions, Jim Secord on global geology, and Sujit Sivasundaram on oil economies, interrogate the relationship between the creation of empires and of natural historical knowledge. Thematising the global is especially important when it comes to thinking about the recent history of natural history, given the acceleration of global exchange and widespread acceptance of environmental issues of global concern. It will probably not surprise readers of Worlds that many of its later chapters grapple with the engagement of modern natural history with concerns such as endangered species, biodiversity loss and natural resource depletion.

Does the book raise new opportunities for crosstalk between the history of natural history and other areas of historical scholarship? Or even other disciplines?

The history of natural history is thoroughly intertwined with other areas of history, such as the histories of empire and capitalism, environmental and agricultural history, medical history, postcolonial studies, history of technology, media studies, history of art, museum studies, and more. This will no doubt be obvious to any reader who engages with multiple contributions to the book: the contributors come from many different backgrounds, including many of the fields just mentioned.

In the intervening time since Cultures, scholars in heritage and museum studies have embraced the subject of natural history collecting to a far greater extent. Meanwhile, many historians of visual culture now consider the preservation of collections essential for cultural, historical and even aesthetic significance. Historians of natural history working with (or within) these communities have the opportunity to engage more with biologists and conservators in making meaning of specimens and accounts. This is especially true as many natural history collections held at institutions around the world become digitized, making accessible materials that have been in deep storage, in some cases for centuries.

It remains a challenge in times of austerity to convince governments and other funders that such collections are worth keeping, let alone investing in, and perhaps that is a place where Worlds can make an important contribution—calling attention to the important role that natural history has played in the making of modern science and modern life and of the rich possibilities for its future.

Thank you, and congratulations to you and all your contributors for putting together such a fantastic volume! Our readers will find more information on the book, its editors, and the HPS Department in the sidebar links. 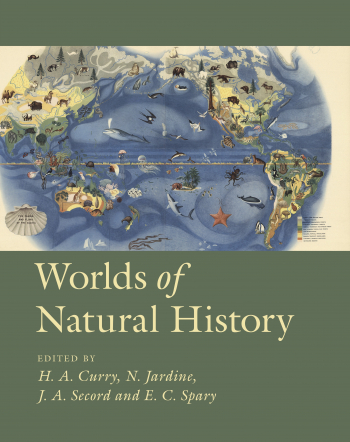