Neurodivergence in the Cambridge bubble

You give your attention to an essay to the point of forgetting the entire world outside of it.

You research a topic for 9 consecutive hours, and you don’t remember eating or even getting up in that time.

You read about this topic with an all-consuming passion, even after you have handed in your essay - you talk about it with your friends, with acquaintances, with your supervisor. You will return to it and refine your thinking on the subject, perhaps pursue it in a dissertation, or a further degree... Or you might keep it running in the background of your thoughts and research, for your own interest and pleasure – it doesn’t need to be studied in isolation, it’s connected to everything.

You would prefer to read about it in the calm environment of your own room than go down to the noisy pub your housemate invited you to.

You are a Cambridge student – maybe not a particularly atypical one.

You are dedicated to your subject. Your supervisor would approve.

The description above might be read in an alternative light, through a lens of neurodevelopmental disorder. Above is a list of symptoms: trouble organising a task, repetitive behaviour, forgetting routine activities, abnormal social approach, restricted interests, sensory processing difficulties. The person described might be diagnosed with ASD and/or ADHD.

From a less pathological perspective, the above description might capture traits particularly common in neurodivergent populations, such as hyperfocus, intense interests and sensory sensitivity.

In the first meeting of our new undergraduate research network exploring Neurodivergent Socialites, we began with where we are: Cambridge. We wondered whether Cambridge selects for and rewards neurodivergence. What does it mean to be a neurodivergent student here?

In discussion, we explored how ‘academically helpful’ elements of neurodivergence are rewarded in the application process for Cambridge. The process recognises the development of particular interests rather than a broader, more ‘well rounded’ academic profile. Stand out super-curriculars may emerge from following an interest to its extreme - for example, ending up on a local town council when one is fixated on politics. Enhanced concentration in a hyper-focus “flow” state may lead to excellent output (Ashinoff & Abu-Akel, 2021). Visual thinking and connection-finding have been shown to be more common in dyslexic people, and these may be assets in creative fields and finding innovative approaches (Cancer et al., 2016). And attention to studies due to interest, or lack of social opportunity, is certainly useful.

And upon arriving at the university, some students reported feeling less alone than they had in school. Neurodivegent students seemed to attract each other as friends – something that might in part be explained by what Damian Milton terms the double empathy problem, which relates to how non-autistic people may struggle to understand autistic people, possibly more than the other way around (Milton, 2012). For some, there’s a feeling of community, even whilst feeling different is embedded in our histories and experiences.

And Cambridge, through its privileging nature, can enable access to diagnosis through funding. Some students reported access to more sensitive diagnosis, as assessors knew to look for inconsistencies in cognitive profile, rather than dismissing struggles on the basis of overall attainment. Through diagnosis, students may be enabled to have their access needs met and do better at university on this account.

However, being diagnosed does not necessarily lead to feeling more confident or happy. The Cambridge environment can fuel a powerful feeling of being disordered. The academic and organisational demands of the university can highlight areas of difficulty. When output of work is the common ground between people, if you are unable to work, you are alienated. What once was viewed positively or neutrally as a personality trait – e.g. class clown, funny, distractible – becomes something seen in a negative light - wrong - and difficult to accept.

Experiences of mental distress often constitute or feel inseparable from neurodivergence. This can be much harder to navigate at an institution so driven by academic success. And when other intersecting experiences cast you as an outsider at Cambridge, this is all the more the case. More externally expressive meltdowns might exclude you further, not least if your emotional expression is racialised and weaponised, for example. Lack of diagnosis may make you seem inconsistent without explanation or support, and there are greater diagnostic barriers for women and people of colour. This will undoubtedly exclude students from thriving at Cambridge, as it will exclude people from applying to the university and from participating in education before this point.

Further, Cambridge is an institution that is not only shaped by, but itself shapes a medical model which sees ‘neurodivergence’ as mental disorder. For example, Simon Baron-Cohen, who directs the Autism Research Centre at Cambridge, proposed two theories heavily criticised by autistic activists: the theory-of-mind model of autism that treats autism as a social deficit and Extreme Male Brain Theory that frames autism as a deficit of empathy, for example (Baron-Cohen, 2010; Baron-Cohen et al., 1985). In fact, Baron-Cohen's expressed fear that prenatal autism screening may “inadvertently 'cure' not just autism but the associated talents that are not in need of treatment” (2009) might be seen to summarise an institutional relationship to this form of neurodivergence, wherein academic talents are beneficial and all other expressions of neurodivergence are undesirable and must be controlled.

The medical model manifests not only in research output and teaching, nor in ill-judged and ignorant comments from supervisors and students about the capabilities of neurodivergent students, but also institutionally in the way that ‘reasonable adjustments’ are made. The requirement for diagnosis sets a threshold for suffering that must be met to access accommodations and forces students to frame their individual learning style in terms of struggle. Students who are skilled compensators and/or who enjoy and view positively their divergent cognition may not be recognised as neurodivergent by tools that look only for signs of impairment and effect on others.

By the end of this first meeting of NeuroSoc, the contradiction within Cambridge’s relationship to neurodivergence was apparent:

In our conversation, a narrative emerged where Cambridge had seemed to select students for their skills that are associated with their neurodivergence, but the institution was felt to be actively detrimental to neurodivergent wellbeing once students are enrolled.

We are excited to pursue questions generated about productivity, social acceptability, and the broader nature of neurodivergence in future Neurodivergent Socialities activities. 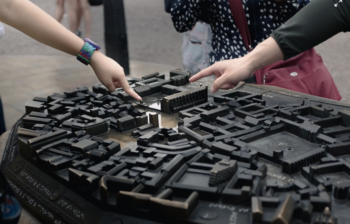 Image: People using a bronze map of the city of Cambridge, outside Great St Mary's Church, by Craig Whitehead (@sixstreetunder) via Unsplash. License.