CfP: Epistemologies of Mapping and the Making of Empire

gloknos associate member Luis Lobo-Guerrero invites paper proposals for a panel to be submitted to Section 18 on Global Epistemics at the European International Studies Association's 13th Pan-European Conference on International Relations (11-14 September 2019, Sofia). Please send your abstract(s) no later than 26 February to l.e.lobo-guerrero@rug.nl

What role do maps, mapcrafting, and map usage play in the making of Empire?

Although maps are frequently used in IR to better understand world politics and depict the globe, they are rarely treated as specific expressions of epistemological practice. This panel challenges such a conventional imaginary of maps and cartography. It treats maps not only as observations of, for example, certain spatial imaginaries, but most importantly, as operations of spatial imaginaries (Jacobs, 2006, Bargues-Pedreny, et.al. eds. 2019). In other words, maps are important epistemological devices in the creation of spatial imaginaries and global political projects. Within IR, maps and cartography have only recently been studied in such a way. In this context, for example, Jordan Branch noted that mapping ‘shapes the conditions of possibility of how actors conceive space, territory, and political authority’ (2014, 41). As such, ‘maps, like theories, shape our understanding of the world by highlighting – and obscuring – particular spatial and social features’ (2014, 36). Such an approach, however, focuses mainly on the governance effects of cartography. For example, it reconstructs how transformations in European cartography between the fifteenth and seventeenth century created new imaginaries of space – and the idea of territory itself. It was only this transformation, which made modern statecraft – based on the idea that the globe is compartmentalised of states with exclusive territory – possible (Strandsbjerg 2010; see also Elden 2013). Yet, here, this panel aims to go one step further. It adds to the effects of maps also their processes of production and translation and the epistemologies involved. Maps, in this respect, are better conceived as, put by Bruno Latour, ‘immutable mobiles’ (1990). By researching maps and cartography in such a way, we can highlight the complex negotiations and contestations of imaginaries of the world.

The panel explores specific imaginaries of the world, namely those in the cartography of Western modern empires. It calls for papers that explore different cartographic projects and their underlying epistemologies, which were crucial in the making of different European empires. Papers presented could be considered as part of an edited volume planned on this topic. 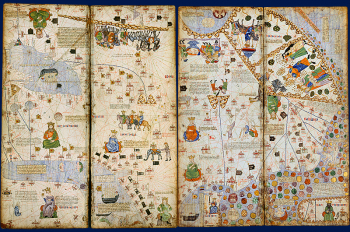