A combination of remotely captured data and satellite coordination has enabled the innovation of self-driving tractors and auto-regulating farm equipment that is revolutionising conventional farming industries. Since Stalin’s Sputnik 1 and the U.S.S.R. and USA Space Race, NASA Landsat satellites have been scanning the earth’s land surface collecting data about forests and crops. Experts in farming industries and general commentators are calling the effects of these new technologies ‘revolutionary’, and speculate about a new-green revolution, digital revolution, or precision farming revolution. My forthcoming book Precision Farming Revolution: Global drivers of local agri-cultural methods (2019) details shifting and changing landscapes and social power dynamics between family farmers, off-farm firms, and the food consuming public.

In academia the effects of these new technologies have divided scholars into two camps of economic and environmental debate. Technological optimists consider that new, revolutionary technologies will enable modern societies to clean up all industrial sectors, thereby striking a harmonious balance with nature (Spaargaren et al., 2000; Mol, 2008). Historical materialists contend that green-hope is little more than green-gloss; unless specific economic mechanisms underpinning modern technologies are brought to an arrest then modern processes will carry on expanding and exploiting nature until inevitable ecological catastrophe or apocalypse (Dickens, 2004; Foster et al., 2010). These same economic mechanisms have come to appropriate traditional forms of lay or tacit knowledge possessed by farmers around the world so that industrial agriculture is globally systematised.

I come from a third-generation farming background and academic theories of appropriation of farming knowledge or remote control over the means of production caused me critical concern, thereby sparking my research interests. As well as offering a fascinating area of sociological, anthropological, or ethnographic research, researching the precision farming revolution offered an opportunity to inform discussions and debates on digital revolution, climate change, world population growth, or food security.

Empirical research was conducted to address the questions: what forces were driving the precision farming revolution and in what direction was it heading? What forms of agency were local farmers exercising in structural reforms? To address these broader questions, I spent four years researching the more substantive questions: why were farmers adopting these reforms and what were the subsequent outcomes of this adoption?

The research aim was to capture a ‘snapshot’ account of the digital revolution in agriculture as it was occurring at that time. From local farms, any relations between farmers, dealerships, and firms were ‘mapped out’ to expose the broader workings of global industrial agricultural systems within the global political economy.

Using my cultural heritage as a gateway into my research field, I conducted research within a small cooperative group of eleven family farms in the West Country of England, Somerset, on a Duchy of Cornwall farming estate, over the course of four years – with a desk based at the Department of Sociology at the University of Cambridge. My research drew on participant observations, individual and focus group interviews, notes from memos of working diaries, trade conferences, articles in newspapers, academic journals, and the farming press. I carried out interviews around farmhouse kitchen tables with large cups of coffee and biscuits. This was the stuff of John Constable and James Herriot, with shotguns, Land Rovers and dogs curled up by the fireplace. Within such rural, British countryside settings high-tech, ‘American-style’ precision farming methods could be considered juxtaposition, making for even more fascinating participant observations.

In so far as my research looked for causes or reasons why, then the book can be seen as a very loose application of critical realist methods to qualitative research data, focusing on causes, causal powers, and conditions causing the revolution and the emergence of precision farming systems (Sayer, 1992; Elder-Vass, 2012). Given this to be the case, sociologists and anthropologists find it easier to describe work, flows, and changes rather than seek causal explanations. Taking more of a holistic methodological approach, one that went beyond the social spheres of local farming communities, since farming communities were also constituted by animals, soils, and crops, I took other non-human causal factors into account. When matters were too complicated for causal accounts, descriptive methods were employed to detail the relationships between various human and non-human actors (Callon, 1998; Law, 2009). Readers are invited to think about these relationships in either relational or causal ways.

To analyse the ‘causes’ of any revolution one would have to take into consideration a vast array of complicated, combined, and interrelated factors – some historians claim the Protestant Reformation in England was a consequence of Henry VII’s broken heart. If one were to take into account the effect of weather on crops, weeds, and pets, Common Agricultural Policy reforms or the Brexit referendum, and so on, one might conclude that study of the drivers of the precision farming revolution could be considered so utterly complicated, given the number of interrelated drivers pushing precision farming systems to emerge, that it could be said that such research questions could never be answered.

By way of mapping out an elaborate web of interrelated causal factors the book takes into account political and economic issues such as intensification gains and market oversupplies, farmer suicides and riots, barricaded supermarkets, anti-modern resistance movements, Brexit and growing demands for British-Grown foods, the Conservative Party push for Agri-Tech innovations, Russian trade embargoes, bacteria and badger culls, as factors that came across in interviews as having some level of impact on local farmers’ investment decisions. Most crucially, in pre-adoption and post-adoption phases, technical breakdowns were the most contentious points of conflict between old, traditional forms of knowledge and newer throughputs of digital data and informational knowledge.

Revolutions should also be fairly simple things to research. The UK’s Conservative Party government issued an Agricultural Technology Strategy (2013), declared a technological revolution, and identified ‘global drivers for change’ that included factors such as increasing pressures on natural resources, world population growth, changes in diets, global climate change, biodiversity loss, to name but a few. Britain was the home of the Industrial Revolution and the Second Industrial Revolution, has seen yield increases as a result of the Green Revolution, and is currently going through a Digital Revolution.

It was possible to map some of the local and non-local driving forces in change, and farmers’ reasons for investment and outcomes of adoption. Like kettles, staircases, bathtubs, or televisions, Global Positioning Systems or ‘GPS’ were just another, everyday household items that were integrated into farm systems. Unlike material objects, GPS is like a worldwide radio station and available to everyone with access to the right knowledge and technologies. Once these systems were set up and running, they ticked along quietly, soon loosing their momentous significance, thereby fading away into the ‘background noise’ of everyday life. Over four years of research, it was fairly easy to observe how farmers opted into these new systems and observe the outcomes of adoption, most noticeably huge increases in accuracy in field work, crop row work and accounting.

Another query the book addresses is the issue of a revolution occurring whilst at the same time not occurring. For many involved in cultural resistance movements to industrial agriculture, still engaged in either conventional or traditional farming methods, the precision farming revolution may not be occurring. Bruno Latour’s (1993) We Have Never Been Modern suggests that not everyone around the world is on the same page of modern, progressive culture – or, not all farmers are modern. For many small hold farmers in undeveloped or ‘non-modern’ cultures around the world who cannot afford the machinery and equipment to begin conventional industrial farming, the precision farming revolution may never occur – or it may occur only perceptively, ideologically, elsewhere, to farmers far removed from local settings or beyond the local horizons.

If it were the case that not all farmers will be affected by the precision farming systems then how should researchers address the notion of ‘revolution’? How should someone distinguish between ‘precision revolution’ or ‘next-green revolution’ and ‘digital revolution’? The book treats ‘agricultural revolution’ as two kinds of things. On the one hand the digital revolution in agriculture was a very real, tangible event that will affect the lives of billions of farmers around the world as well as current and future generations of food consumers. On the other hand, the idea of revolution played an instrumental role in the revolution. The revolution was something conceptual, sometimes sensationalistic and ideological in a hegemonic or monolithic sense. Hegemonic ideology and metanarratives of revolution or ‘the future of farming’ were envisioned by actors within agricultural industries or within geopolitical spheres, then disseminated, circulated, and communicated to local farmers in advanced cultures. Such systems of ideas about ‘cutting edge revolution’ got people to move, act, behave differently, or invest money.

The book, forthcoming with Palgrave Macmillan later in 2019, will step foot into two areas of academic interest. On the one hand it will provide insights into the barriers and enablers of adoption for policy makers, politicians, agriculturalists, and sociologists who are interested in the practical application and uses of precision farming systems. On the other hand it takes a step out of this comfort zone and attempts to address more sociological questions about change, transition, innovation, modern progress, and revolution.

[The views, thoughts, and opinions expressed in this text belong solely to the author and do not represent the views of gloknos, CRASSH, or the University of Cambridge]

Callon M. (1998) The Laws of the Markets, Oxford: Blackwell Publishers.

Latour B. (1993) We Have Never Been Modern, Hemel Hempstead: Harvester Wheatsheaf. 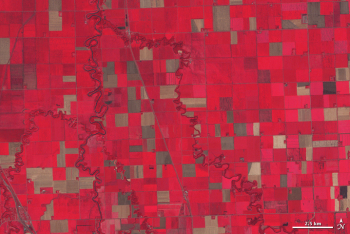